Our Grand Central Gallery & Store is located just off the Main Concourse in the Shuttle Passage, adjacent to the Station Masters’ Office. Masks are required throughout the Terminal. Click here for hours, admission, and directions. The Bronx is unique in New York City. It is the only portion of the city not on an island, the only part physically located on the North American continent, and the only borough that allows—some might say demands—an article in its title.

The distinctiveness of The Bronx’s architecture and neighborhoods is a testament to the people who arrived in two waves of urbanization caused by developing transportation: the steam railroads that connected the area to upstate New York, Connecticut, and beyond, and the expansion of the subway.

The New York Transit Museum is located in a decommissioned subway station at 99 Schermerhorn Street. Advance tickets and masks are required for entry. Click here for hours, admission, and directions. As New York’s subway system was being planned at the turn of the 20th century, transit officials did what any large construction company would do today: hired an official photographer to take survey photographs and provide precise documentation of an area prior to—and during—construction. Streetscapes & Subways: Photographs by Pierre P. and Granville W. Pullis provides a rare view of the last days of “old New York” through the lenses of two of the earliest photographers of subway construction. The photographs transcend their original purpose, showing New York changing on a daily basis as a result of the subway and revealing architectural and cultural details of a city that would otherwise be long forgotten. 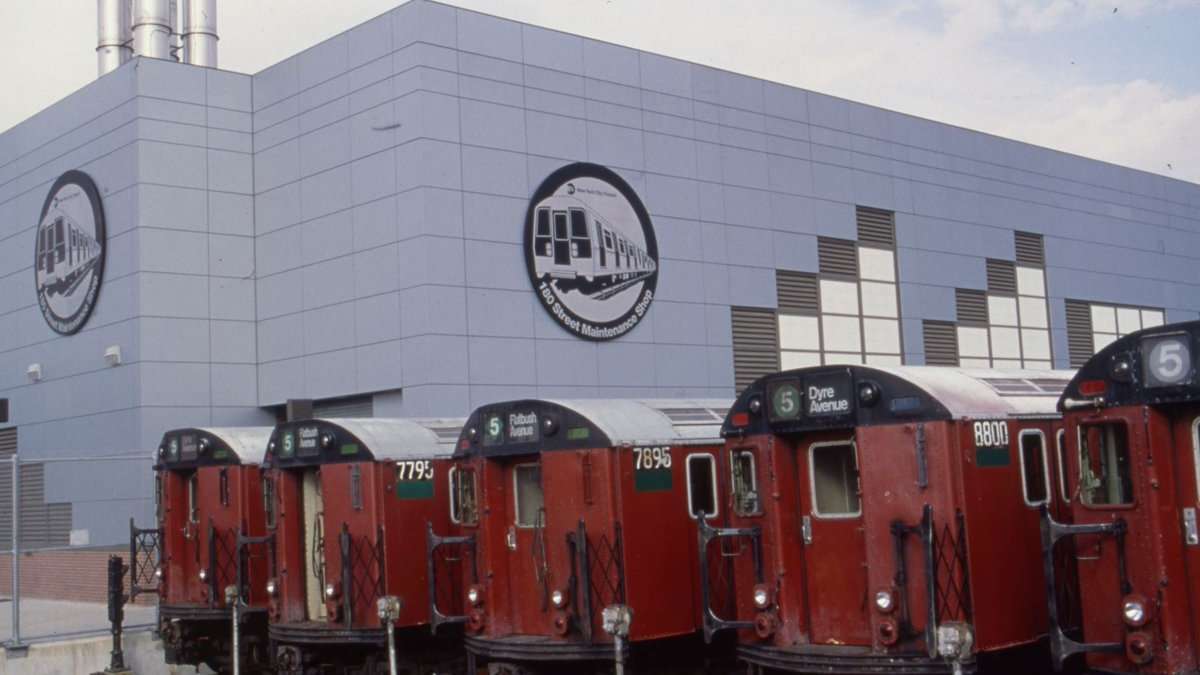 Reign of the Redbirds

2019 marks the 60th anniversary of the introduction of the R-26, the first of nine types of similar-looking subway cars that ultimately came to be known as “Redbirds.” If you rode the subway between 1959 and 2003, chances are it was on one of these cars. Introduced at varying times and in various colors, they collectively came to be known as “Redbirds” because of the color they were painted from 1984 until the fleet’s retirement in 2003. Boxy and industrial-looking, the cars that became the Redbirds arrived in New York City at a time of great transition. In service for more than four decades, they captured the imaginations of millions, became as iconic as the subway token, and still evoke expressions of admiration to this day.

Reign of the Redbird is sponsored by 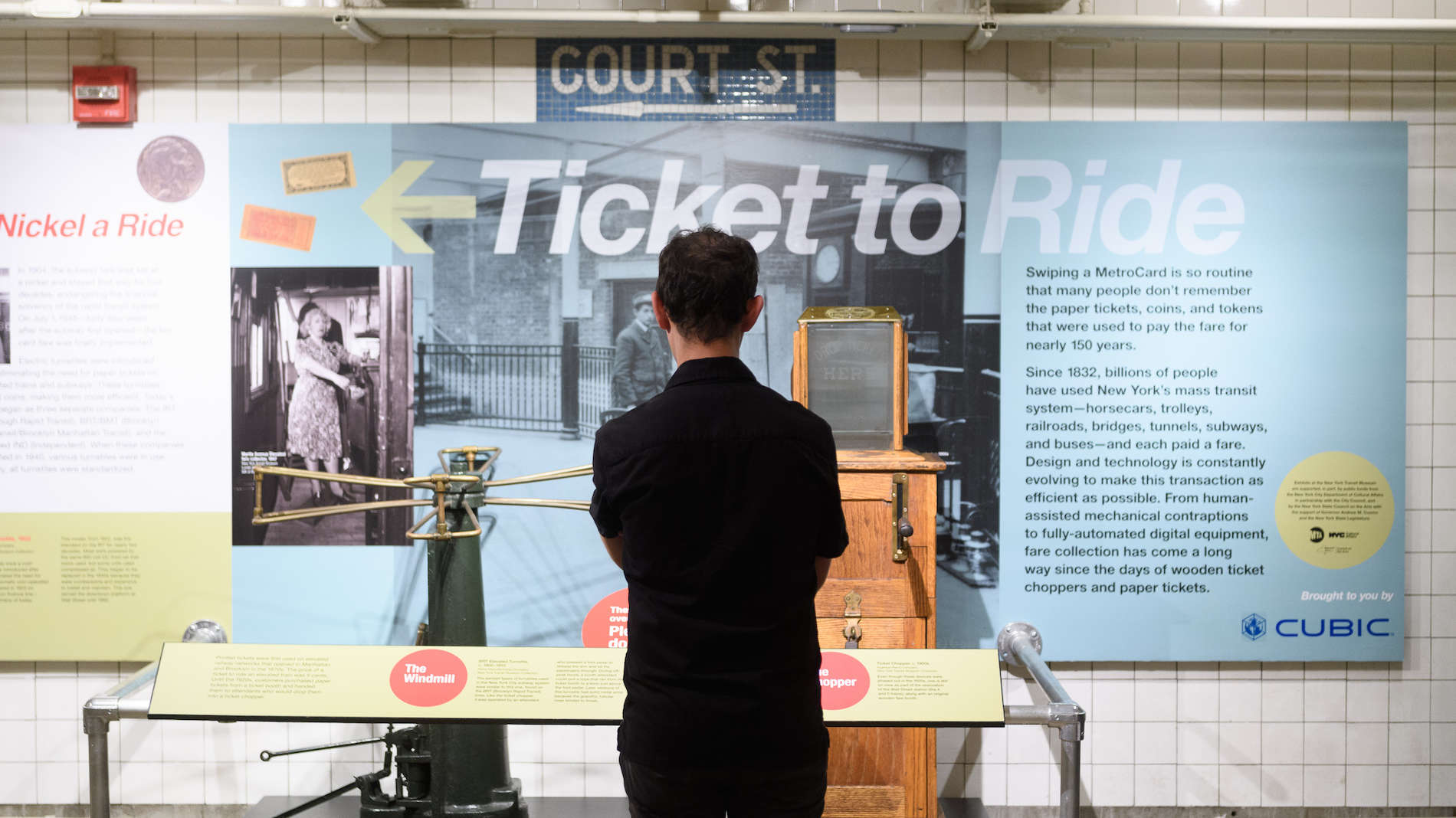 Through archival photographs, ephemera, and objects from the Transit Museum’s extensive collection, Ticket to Ride shows the evolution of fare collection across all of New York’s modes of transportation. Visitors will see and touch different types of collection equipment such as turnstiles and fare boxes, get a sense the colossal process of fare collection, and see some of the people who make sure the money goes where it’s supposed to go.

Ticket to Ride is generously sponsored by

Steel, Stone & Backbone: Building New York’s Subways presents a look at the construction methods and labor required to build the city’s first subway line at the turn of the 20th Century. Historical artifacts, video and photography footage bring to life the dedication and tenacity of the workers who made this project possible.

Moving the Millions highlights the evolution of the subway and the major issues and events that influenced the development of the largest transportation network in North America.  Home to twenty vintage subway and elevated cars dating back to 1907, and a working signal tower, the Museum’s working platform level spans a full city block

On the Streets: New York’s Trolleys and Buses tells the story of above ground mobility and surface transit from the early 1800s to the present.  A 12-seat city bus, “fishbowl” bus cab, walk-don’t walk signs, parking meters, fire hydrants, traffic lights, and an array of other interactive “Street furniture” bring this exhibit to life. Visitors can also learn about the evolution of fuel technologies and its environmental impact.

No Spitting on the Platform includes a selection of historic way-finding and platform etiquette signage from the New York Transit Museum’s archives.

The Dr. George T.F Rahilly Trolley and Bus Study Center features over 50 detailed scale models of trolleys and work cars, with a focus on Brooklyn. Bringing Back the City: Mass Transit Responds to Crises

Bringing Back the City offers a unique perspective on the vital, often unseen, work of New York’s transit employees. Using the events of 9/11, the 2003 Northeast Blackout, Hurricane Sandy and other severe weather events as examples, the online exhibition reveals the critical role that mass transit personnel play in preparing for and responding to natural and man-made disasters. Through a vibrant display of objects, photographs, media, and personal accounts, the exhibition highlights the technical and professional skills needed to restore public transportation service and get New Yorkers moving again after crisis strikes.

Bringing Back the City was originally on view at the New York Transit Museum in Downtown Brooklyn September 29, 2015 through September 2, 2018. Due to its popularity the exhibition lives on in this online version for the public to enjoy. Grand By Design: A Centennial Celebration of Grand Central Terminal

Grand by Design: A Centennial Celebration of Grand Central Terminal features artifacts and photographs – many rarely exhibited – from the New York Transit Museum collection. The digital exhibit presents the Terminal itself as an artifact, using archival images and interviews that convey the story of the building’s past, present and future in larger-than-life detail.

Grand by Design was originally on display in Vanderbilt Hall February 1 to March 15, 2013 to commemorate the Centennial of Grand Central Terminal. The exhibition was also displayed at the Riverfront Library in Yonkers, New York January 11 to March 17, 2014. Due to its popularity the exhibition lives on in this online version for the public to enjoy. The Transit Museum is dedicated to collecting, preserving and making accessible materials relating to the region’s land based public transportation systems, past and present. Read More about “Collections” > Check out a selection of restored train cars and buses from our vintage fleet! Read More about “Vintage Fleet” >